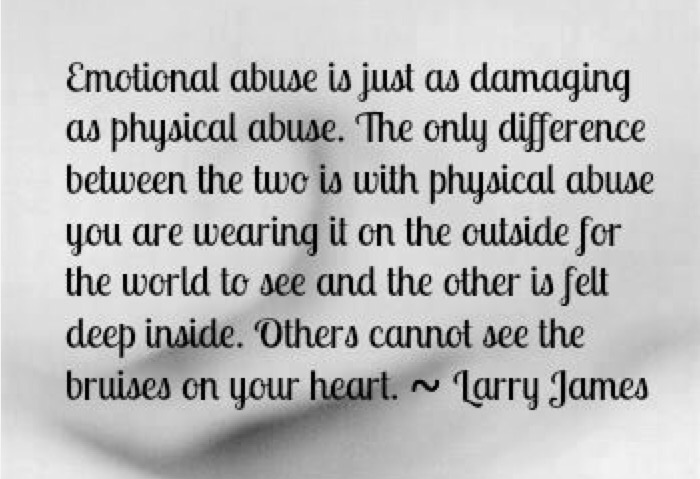 Emotional abuse is an uncomfortable reality, a social taboo. As such, it is the least talked about yet most common form of abuse. It is insidious and subjective in nature. Due to language and cultural differences — depending on the individuals, the setting and the culture — some abuses are simply overlooked because they are intangible, invisible and physically immeasurable, so they can easily be “played-down,” brushed-off or ignored. So much so that it is not uncommon for victims themselves to not even realize that they have been, or are being, psychologically violated.

“Sticks and stones may break my bones, but names will never hurt me” is absolutely inaccurate. On the surface emotional abuse may seem like “only words” and perhaps that doesn’t appear to be severe or dramatic, but the effects of emotional abuse are very damaging, run deeper and have longer-lasting effects than physical abuse. Physical scars heal within a relatively short time, whereas the psychological effects of emotional abuse lingers and effects the victim in many facets, if not every facet, of their life, rooting at their core and stemming without.

It is a consistent or regular series of events, incidents or patterns of behavior that occur (repetitively) over time. Whereby the abuser, using various means involving words manipulates, gains and maintains psychological and physical control over the victim. This behavior may or may not be intentional. Regardless, it is completely damaging to the victims confidence and self-esteem.

Lured into this relationship under false pretenses, often times, especially at first, victims — and sometimes their tormentors — may not even recognize the cycle of abuse that they’re trapped in.
Together, tormentors are menacing and victims are uneasy. Coexisting in an emotionally muddled scenario where the tormentor disregards their victims feelings, subjects him or her to constant or frequent criticisms, aggressive behaviors and/or being ignored — while keeping them close in a seemingly copacetic relationship.

Victims often have a hard time understanding why they feel as bad as they do. They don’t necessarily see the mistreatment as abusive. They have developed coping mechanisms, such as denial, to deal with the stress brought on by the abuse they have suffered and are continuing to endure.

This confusing emotional cluster has a deep and profound effect on the victims ability to maintain integrity, a balanced self-image, self-respect and confidence because emotional abuses are personal and cut to the core of the victim’s psyche where they are internalized and leave lasting impressions such as fear, anxiety, confusion, feelings of insignificance, distrust, emotional neediness, unworthiness, ugliness, a feeling of undeserving, unlovable, deserving of blame, unlikable and deserving of punishment. The effects of long-term emotional abuse can cause severe emotional trauma in the victim, including depression, anxiety, and post traumatic stress disorder.

This can happen anywhere — home, work or any other place; and within any type of relationship.

The first step in healing from an abusive relationship is recognizing that you are involved in one.

If you recognize the patterns described in a relationship that you are involved in — be careful.

No one has the right to bully and belittle you. Keep in mind that you are most likely not dealing with a psychologically stable-minded individual, you do not want to do anything to place yourself in harms way.

Take steps to educate yourself — this is free and easy, simply reading whatever material you can, online or at the library.

Become a student of yourself, discovering the ‘you” that exists beneath the nonsense.

Hear your own voice, give yourself permission to listen to it and honor your feelings — you DO have feelings that you, and only you, own.

Everyone learns to walk one step at a time.

This this is not a race — it’s a challenge to discover and love yourself.

Go slowly, but proceed with purpose — YOU are waiting at the finish line.  Taking these steps, investing the time, using caution will lead to the bloom of a beautiful new liberated you and you will have a new-found independence.

You are with it!
Jay❤️

Every action causes a reaction. Be cognizant of the ripples that you create, they may become someone else’s tidal wave!